Some of the musicians who are regular perfomers in the Burton Bradstock Festival. 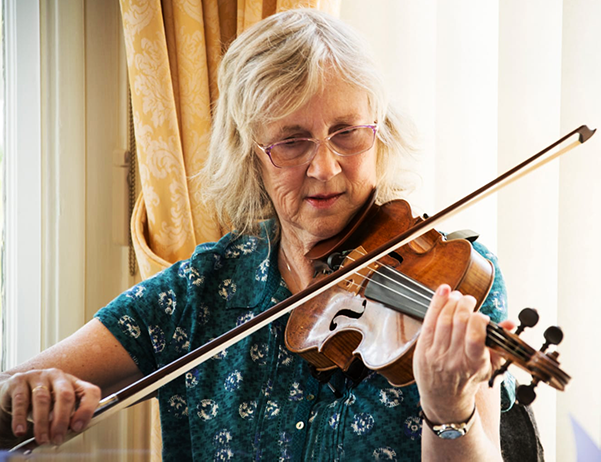 Jane was born into an academic family in Cambridge; however her potential as a violinist was spotted at an early age. After playing with the university orchestra, Jane went to study at the Royal Academy of Music, where her violin teachers were Emanuel Hurwitz and David Martin. There then followed an orchestral career as a member of the City of Birmingham Symphony Orchestra, the Orchestra of Welsh Opera and the Royal Ballet Sinfonia.

On moving to Dorset, Jane played frequently with the Bournemouth Symphony, and also expanded her chamber music work, forming a string quartet, giving concerts in the Dorchester Museum. Jane was also a much-loved violin teacher and music therapist.

It’s no exaggeration to say that each year Jane looked forward to the Burton Bradstock Festival. She was a regular for many years, in fact one of the longest serving players and a part of its special atmosphere. Jane leaves three children, Becky, Clare and Tom, and six grandchildren. She will be greatly missed.

Some of the guest musicians who have played at the Festival.

Six days of brilliant classical, jazz and world music with internationally acclaimed performers and a nine-day exhibition featuring some of the finest art and ceramics in the South West.